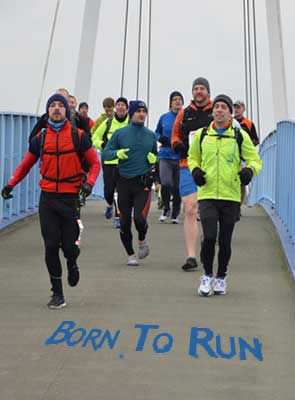 One of Wales’ newest ultramarathons, the Born to Run ultra took place 23 February on a cold Llanelli day for the second time with 40 starters from entries across the UK. The 38 finishers were led home by Steve Babb of Newquay Road Runners who covered the 40 mile race in time of 5:16:00.
The first lady home was Elaine Dean in 6:40:30.
The course, officially mixed terrain but predominantly tarmac, is described as “a deceivingly demanding route” that starts from Bynea Cycle Club and follows the coastal path to Burry Port Industrial Estate and passes through Sandy Water Park where it joins the Mynydd Mawr route which then heads to Tumble before returning to Bynea C.C.
The race is organised by Matt Rogerson who has his own personal project, the 700 mile I AM PREMIER LEAGUE project coming up at the end of March.