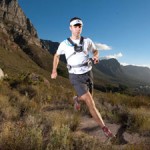 The North Face® sponsored ultra-distance runner, Jez Bragg, finished top of the podium over the weekend after running an outstanding 100km at the Commonwealth Road Running Championships.

Jez, who was representing England, finished the race in just over 7 hours – 1 minute and 27 seconds ahead of second place runner, Matt Giles.

The Championships, held in Keswick at the heart of the beautiful Cumbrian countryside, saw top athletes from the Commonwealth nations come together to compete in one of the toughest and most spectacular competitions.

Says Jez: “It doesn’t get any more exciting than to win gold in an England vest against the best in the Commonwealth. The race was really demanding and tested me to my limits, not only was it a challenge of speed and endurance, but it also tested my mental strength.”

Jackie Fairweather who took bronze medal at the Commonwealth Games Marathon in 2002 has stepped up and produced an excellent performance in Cumbria to take a Gold medal with a time of 7.41.23.

Resources
Jez has posted some notes on his blog about the Keswick 100 km race.
Scottish runner Fiona Rennie has an account of Gail Murdoch’s Commonwealth 100 km race on her blog, A Fun Runners Ultra Tales