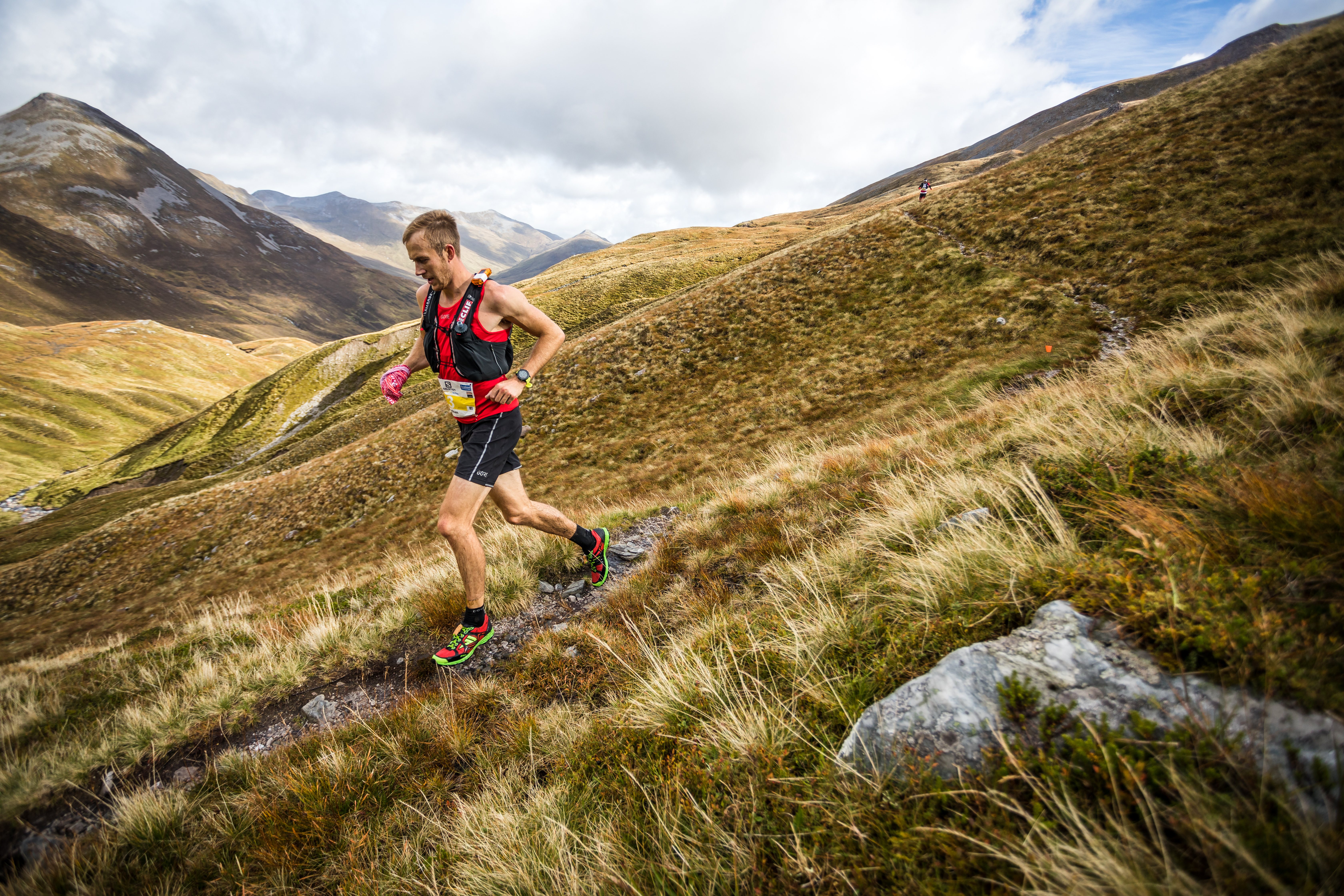 Brit Jonathan Albon and Ragna Dabats, of The Netherlands, triumph as challenging weather forced race officials to swap to the bad weather course for the Salomon Ben Nevis Ultra race.
Still a strenuous race, the ULTRA World Championships course extended to 47.5km with a total ascent of 1640m, although it missed out the higher summits of the original course, including the summit of the UK’s highest mountain Ben Nevis.
Jonathan, who was last year’s EXTREME Skyrunner® World Series Champion, led for most of the ULTRA and finished in 3:48:02, 12 minutes ahead of the other runners. He said: “The course was not what we had come to compete on, but it was still a hard race for different reasons. “After the first section of wet and slippery fells-like running, the route turned into a trail marathon. “It was very runnable and that made it very fast but also very hard when you have trained for the mountains.” However, Jonathan, who lives in Norway with his ultrarunning wife Henriette, reckoned the course suited him better than others today. He said: “I would have liked to have won on a classic ULTRA course but the weather is what the weather is and it’s still a win. “After the ups and downs, I guess the course just suited my stride and speed better. It’s great to be the ULTRA World Champion.”
In second and third places were: · André Jonsson, of Sweden: 4:00:35 and Luis Alberto Hernando Alzaga, of Spain: 4:01:21

Winning female Ragna Dabats, of The Netherlands, stole the show today when she crossed the finish line in Kinlochleven holding her daughter’s hand.
Ragna, who was 14 minutes ahead of the rest of the female field in 4:36:20, said: “I am really happy to be the winner. My season could not be more perfect because first I became the Trail World Champion (in May) and now the ULTRA Skyrunning World Champion.” Ragna, 39, who was also the European Champion in skyrunning in 2017, enjoyed the course. She said: “It was a very fast course. The first part was very muddy and wet and I fell over completely in a big puddle, with my head right in. It was very steep up and down. “The second part on tracks was very fast so I was just hoping my legs would be strong enough to get me to the finish. “I think it was good for me because although I am not used to the mud I like the stony tracks. The win is so perfect for me.”

To the amazement of spectators at the finish area in Kinlochleven, there was a sprint for the line to decide second and third female places. In the end, only four seconds divided runner-up Gema Arenas Alcazar, of Spain, and bronze placed Maria Mercedes Pila Viracocha, of Ecuador, after almost 50km of running. Gema said: “That was so tough. It was very fast for most of the race and I had to work very hard to overtake the other women.”
The results revealed she pushed hard on the second half of the course.She said: “There was a lot of work to be done and I overtook women and then I was overtaken and then I overtook again. “I had to run very fast to the finish.”

The women’s results revealed the breadth of nationalities at the 2018 Skyrunning World Championships; there were nine different nationalities among the top 10 places.

What’s next at Skyline Scotland race weekend?
There are still two days of Skyrunning races to be played out in the mountainous heart of the Scottish Highlands. Athletes will take on the final 2018 Skyrunning World Championships race, the Salomon Ring of Steall Skyrace. The Salomon Ring of Steall Skyrace is also the fifth and final race of a new hotly contested Golden Trail Series. The flagship Salomon Glen Coe Skyline® takes place on Sunday.

For more details about the Skyline Scotland event see: www.skylinescotland.com

Scotland’s Year of Young People 2018
Skyline Scotland celebrates Scotland’s Year of Young People 2018 by welcoming pupils from local secondary schools, Ardnamurchan High School and Kinlochleven High School, to be part of the event. Support and sponsorship of Skyline Scotland The 2018 Salomon Skyline Scotland is supported by EventScotland, part of VisitScotland’s Events Directorate. Paul Bush OBE, VisitScotland’s Director of Events, said: “The Scottish Highlands is the perfect stage for the 2018 Skyrunning World Championships, the world’s greatest mountain event. “With some of the world’s best athlete’s set to compete, EventScotland is delighted to be supporting this extreme event as it comes to Scotland for the first time, strengthening the region’s status as a global adventure capital. “It is also great to see the event celebrating Scotland’s Year of Young People 2018 by giving local young people the chance to be involved in the delivery of the World Championships.”