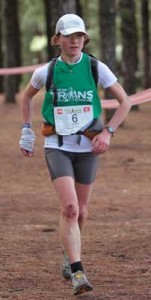 Globe-trotting Lizzy Hawker, after winning the womens race in the Annapurna 100 in January, is first woman and 13th overall at the 123 km Transgranaria ultramarathon.

The North Face® Transgrancanaria took place in unusually cool and wet weather conditions for the time of year. To the sound of the starter gun at midnight (GMT) Friday 4th March 2011, 282 ultra-runners from Spain and Europe took part in the headline 123km race. Starting at Playa Del Ingles, in the south of the island, it was a long night’s run through the island’s national park exposing spectacular and varied mountainous terrain. Runners climbed to an accumulated height gain of 8,500m, to a maximum height of 1,949m at the highest point of the island, back down to sea level through Saturday morning to the finish line at the capital Las Palmas de Gran Canaria in the north.

In the women’s category, The North Face® accomplished multi-sport athlete, Elizabeth ‘Lizzy’ Hawker (GBR) ecstatically claimed the 1st place win and 13th overall, as 2011 unfolds to be a successful year for her. Arriving at a time of 15h:55m:47s, nearly a full hour ahead of second place finisher, Nerea Martinez (ESP), smiling and in a relaxed mood, and despite a few falls, Lizzy explained: “My knees took a bit of a bashing but I’m happy to be here and share the race with everyone.”

The North Face® Transgrancanaria featured races for all levels of runners at various distances: from the full 123-km race; a coast-to-coast 96-km race; a 42-km marathon; and a starter run of 24-km. Over 1400 competitors started the race.

Follow The North Face® European ultra-running events throughout the season: