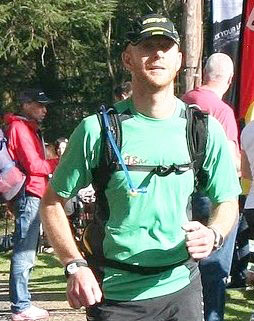 After turning his ankle in the Ultra Trail South West race, Neil was really concerned that it would prevent him from taking part in the TE but after so much investment he decided there wasn’t really an option not to at least start. So after not having really run in the last 12 weeks there was a lot of uncertainty about how the first day would go and whether or not he would be riding in the bus until they reached civilisation again.

Neils fears were unfounded as though still a problem, today its his knees that are bothering him. A well known phenomena of how problems get relegated from the top of the attention-table.

Despite his problems, Neil has been maintaining a good pace and currently is lying in 9th place out of the 38 remaining runners. Leading the race for the men is Frenchman Stéphane Pelissier and Ria Buiten from the Netherlands is leading the womens race.

Neil is having trouble finding WiFi in Germany so is unable to update his website at the moment though he is able to post to his Facebook page:

2 thoughts on “Neil Bryant In The 2012 Trans-Europe Footrace”