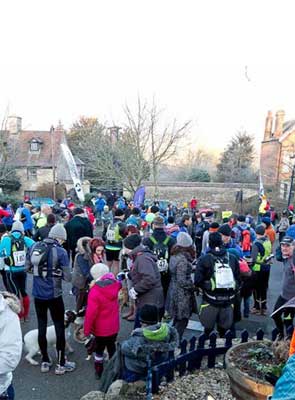 48 hours before the UK’s largest single day ultra the river Thames finally decided to break it’s banks resulting in over 50% of the course being submerged under a metre of flood water, and as the river continued to rise throughout Thursday and Friday most runners were forced to consider the possibility of another race falling foul of the British weather. Go Beyond however are made of sterner stuff and after considerable rerouting a new course was created for 2013 taking in some stunning views of the swollen river from higher vantage points.
Bacon sandwiches, toast, coffee and even porridge were available before the off at the Prince of Wales in Iffley, and with 50 miles ahead of them runners took full advantage of the last minute calorie intake.

In the end 265 runners took to the start line with Dan Doherty and Scott Forbes arriving at the first control point at Culham lock with a slender advantage over the rest of the field. After 16 miles the leading pair had been joined by Benjamine Hall and defending champion Craig Holgate and built a fifteen minute gap to the ensuing pack.
The customary food stop at half way had been moved to the Eastern side of the river due to the impassable state of the western bank of the Thames. By this point Benjamine was starting to pay for the early pace and had dropped back to the second group of runners whist Dan, Scott and Craig continued to push on extending their lead to an impressive 23 minutes. Behind them runners enjoyed the fine faire on offer with particularly favorable feedback reserved for the range of savoury food and the now legendary Go Beyond fruit cake.

By Pangbourne the lead group was further whittled down to just 2 as Scott Forbes came through trailing Dan Doherty and Craig Holgate by 6 minutes. A last minute course inspection on Friday and water levels that had finally started dropping meant that this section of the Thames path remained unaltered despite a short section of icy cold water as runners neared Sonning.

The leading 2 continued to push on regardless, setting the fastest closing section and finishing together in 5 hours 11minutes 50 seconds. Nearly half an hour inside the previous best time albeit on a slightly shortened course. Scott Forbes held on to third place finishing just 5 minutes ahead of fast finishing Luc Jolly in fourth.
There were some exceptional performances in the ladies race with 4 females in the top 20 overall. The early pace was set by Naomi Tier and Caroline McKay, both arriving at Culham inside the hour mark. With another 4 ladies within 2 ½ minutes all was set for a tight race. Naomi continued to set the pace, opening a large gap by halfway and at one point lying in 4th place overall. Eventually bringing the race home in 6 hours 16 minutes and 34 seconds for 7th place overall. Behind her positions constantly changed as Caroline McKay and Wendy Shaw started out strongly and later on Jessica Leitch and Sophie Gaskell took over and started closing in on the race leader. In the end Alison Young finished strongly to move up over the last 5 miles into second place with Sophie Gaskell holding on to take third.
Other notable performances on the day, our 10th placed runner Phil Hoy in an incredible time of 6 hours 23 minutes not only winning the V50 category but comfortably beating more than 200 younger runners ! and Paul Ali who finished in 6:49:53. Maintaining his record of completing every one of the 5 Thames Trot races held.

With more than 30 runners combined the event with raising money for official race charities Cure Parkinsons Trust and Teach Africa many thousands of pounds were raised for the important work of these charities.
Our thanks go out to Apex Sports, Scott & Gu Energy for their generous support of the race, Richer Sea photography who captured the race for all to see, Pal Therapies who provided race massage and Physio at the finish and to all the athletes who proved beyond doubt what a resilient and adaptable bunch of people ultra runners are.
Finally congratulations to all runners who completed the redesigned Thames Trot on Saturday despite the worst mother nature could throw at us. Roll on 2014 !

Visit Go Beyond Ultra for full results and details of other great events.