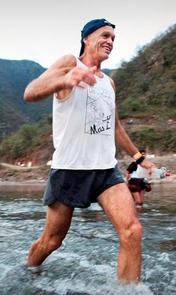 Caballo Blanco,(AKA Micah True) one of the featured runners in Chris Macdougall’s popular ultrarunning book, Born To Run, will be in the UK in September giving talks.

Caballo is the race director of the Copper Canyon Ultra Marathon – a 50 mile ultra whichs together some of the best runners from the US and the Tarahumara. The Tarahumara or Rarámuri are an indigineous tribe of Mexicans who live in the canyons of the Sierra Madre, they have a legendary reputation for distance running great distances in homemade sandals and were the hidden tribe in Christopher Macdougals book.
More details and to order tickets visit: caballoblanco.weebly.com/