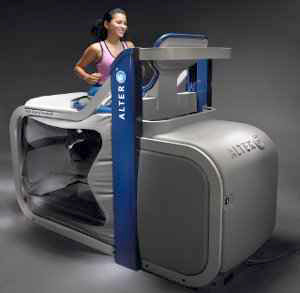 An exercise machine designed to help astronauts walk on the moon is now the hottest bit of gym kit in the UK.

Called the AlterG treadmill, it allows you to exercise while reducing the force of gravity, A person’s body weight can be reduced by up to 80 per cent.

Inspired by NASA the AlterG is used by Manchester United, runner Paula Radcliffe and by the US Army to treat injured soldiers.

But with a whooping £27,000 price tag there are only five in the UK available for public use – with one of them in Cheltenham.

Personal trainer Dan Fivey purchased it for his Personal Training Studio. Situated above the Up and Running shop in the High Street, the studio is the antidote to big gyms.

“There is no membership fee, no loud music or videos, no mirrors, just you and your personal trainer,” said Dan. “People find they work harder and are achieving great results in a shorter time.”

Dan spends a lot of time working with people recovering from injuries. When he read about the AlterG he felt it was the ideal piece of equipment for the studio.

The technology behind the state-of-the-are treadmill is simple. Compressed air is pumped into a plastic chamber over the treadmill, creating “lift”.

The user is sealed from the waist down inside the chamber, and a computer panel allows patients to take up to 80 per cent of their body weight off their joints.

“It sounds so bizarre because we live every day in 100% bodyweight. To run or exercise without your body weight seems a bit odd,” said Dan.

“Don’t be fooled. You still get the cardio-vascular work-out but without the pounding through your joints, so your ankles and knees are not taking a lot of pressure.”

So a 18 stone man can wind up effectively feeling like he weighs just 4 stone – which is crucial when you are recovered from an injury.

The machines are also used to help obese patients – not just for training, but in giving them incentive by showing them how their feet and knees would feel better if they lost weight.

The concept of using advanced differential air pressure technology for weight support was conceived by Robert Whalen, a NASA researcher who was studying the biomechanics of exercise in space.

The first version arrived in 2007, developed by the namesake company in California. A second-generation commercial version came out in October 2009.

The treadmill is not limited to people recovering from injuries. Runners do not suffer from cramps when using the AlterG. By reducing the body weight, the muscle produce less lactic acid which causes cramp.

“A lot of people worry that they’re not going to be as fit if they’re on the AlterG,” said Dan.

“By altering the intensity of the run, we give them the same workout. I have clients who are running marathons who are training on the AlterG. They use it to build their pace while easing the stress on their joints. There’s nothing else that can do what this machine can. You can have normal gait mechanics at a reduced body weight. It’s quite amazing.”