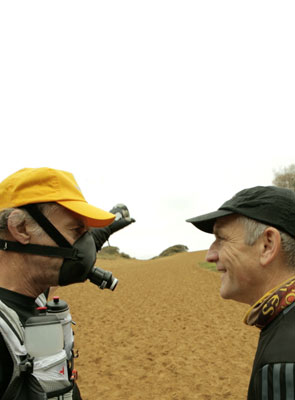 Marie Curie announced today that their long-term supporter and the world’s greatest living explorer, Sir Ranulph Fiennes, will take on the often dubbed  ‘toughest footrace on earth’, the Marathon des Sables, in a bid to become the oldest Briton to ever complete the race.

Sir Ranulph, who turns 71 this March, will be embarking on this monumental challenge in a bid to raise £2.5million for UK charity Marie Curie.  The money raised will help the charity to provide more free care and support to people living with any terminal illness, and their families, across the UK.

Taking place in the Western Sahara this April, the Marathon des Sables is a gruelling six day ‘ultra-marathon’ which covers 251 km/156 miles in over 50 degrees centigrade heat.  The race includes the distance of up to a marathon a day for five days and a double marathon one day, with runners having to carry everything they need including their food and water on their backs.

Sir Ranulph is no stranger to physical challenges and is the holder of several endurance records despite suffering two heart attacks, undergoing a double heart bypass, a cancer operation and an on-going fight with diabetes.

“It’s going to be a challenge, but I’ve been assured my heart is mechanically up to it. The next three months are going to be full on with intense training. I can’t wait to get out there, and raise lots of money for Marie Curie in the process.”

Sir Ranulph Fiennes has already raised £6.3million for Marie Curie. In 2007 despite suffering from vertigo, Sir Ranulph climbed the Eiger by its north face for the charity.  In May 2009, at the age of 65, he climbed to the summit of Mount Everest, again for Marie Curie, making him the oldest British person to achieve this.
Specialist training for the Marathon des Sables is essential and Sir Ranulph has been working with Cardiff-based trainer Rory Coleman. Rory, who has donated his fee for the training to Marie Curie, said: “It’s going to be a tough undertaking for Sir Ranulph, he’s taking on the extremes of the  heat, desert storms and endless sand dunes, instead of the minus 50 degrees centigrade, high altitudes, snow and ice that he’s far more used to conquering.

“It’s my job to get him to the finish line safely and in one piece. So far the training has been going really well, he’s still a real machine and although he has admitted to not liking the heat very much, he really has no off button when it comes to giving it everything he’s got, he’s a coaching dream.”

“All the tests showed that Sir Ranulph is in very good physical shape and despite his cardiac history, his heart is normal”.

Chief Executive of Marie Curie, Dr Jane Collins said: “We are thrilled and privileged that Sir Ranulph has chosen to undertake another huge challenge for the charity. He has quite literally gone to the end of the earth and back to raise money for Marie Curie. His determination and ability to push himself to his limits is truly inspiring. We hope Sir Ranulph will inspire others to take on their own personal challenge in aid of Marie Curie and help us care for more people living with a terminal illness.”

Sir Ranulph was the first person to visit both the North and South Poles by surface means with Dr Mike Stroud and the first to completely cross the Antarctic continent on foot. In 2003 just four months after recovering from a heart attack and a double heart bypass, Sir Ranulph (and Stroud) completed seven marathons, in seven days on seven continents. Speaking after the event, he said: “In retrospect I wouldn’t have done it. I wouldn’t do it again.”

To donate to Sir Ranulph’s challenge visit www.justgiving.com/ranulph  or text RUN to 70007 to donate £5 plus a message of support to Sir Ranulph.