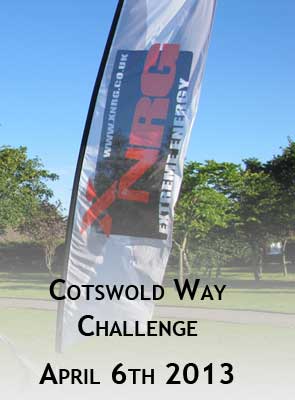 The Cotswold Way Challenge, new for 2013, is the latest addition to the Extreme Energy programme of multi-day ultramarathon events. The course covers 57 miles over two days on 6 & 7 April 2013, and 57 brave runners and walkers aged from 25 to 68 have already signed up to take part.

The rolling Cotswold countryside is quintessentially English, but don’t be deceived: the gentle contours along the two-day route add up to 2750m of vertical ascent: that’s equivalent to climbing England’s four highest mountains, Scafell Pike, Helvellyn, Skiddaw& Great Gable in one go.

Designated a National Trail in 2007, the full length of the Cotswold Way stretches 102 miles from Chipping Campden to Bath, and the current record for running it stands at 20 hours, 36 minutes.

Extreme Energy Race Director Steve Patterson has chosen the first 57 miles as the testing ground for this race route: steeped in history, the course between Chipping Campden and Stroud takes in Belas Knap Neolithic burial ground; Broadway Tower and Sudeley Castle, as well as a host of historic houses, churches and classic Cotswold villages. This first edition of the Cotswold Way Challenge will add the history of the route: the winner will become the first course record holder for the 57-mile Challenge distance, so there’s everything to play for!

Extreme Energy’s all-inclusive multi-day challenges are a popular warm-up for the Marathon des Sables. The Cotswold Way Challenge will also attract all those with an eye on the 2014 UTMB, with finishers picking up two of the seven qualifying points needed. Registered runners will travel from as far afield as Germany, and registrations for the one- and two-day races are still open.