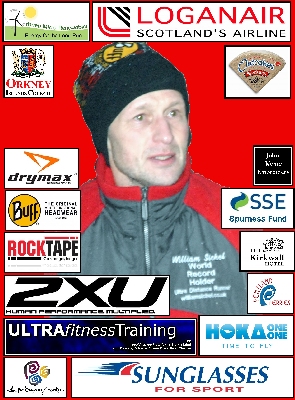 William Sichel is currently the most successful multiday runner in the UK. Always seeking to improve his times and mileages, William has looked at all aspects of his performances to elicit his best response in any event. Whilst looking ahead to Williams next big race, the EMU 6 Day Race in Hungary, I asked William if he could share his thoughts on the importance of his ultramarathon preparation.

Throughout my ultra career, preparation in all its aspects has been key to my success.  A large part of this, especially in the early years, is due to my geographical location just above the 59th parallel in the Orkney archipelago in the far north of Scotland.

Early journeys to races were so complicated to arrange and so expensive that the thought of leaving something at home or underperforming at the intended event were virtually unthinkable and simply couldn’t be allowed to occur.

My response to this was to devote huge time, thought and resources to my preparation and this has certainly paid off over the years with an exceptionally low rate of DNFs in this fickle sport.  Indeed, I’m very proud of my consistent performance level across a wide range of ultra distance events from 100km up to 1000 miles.

So “how have you done it?” I hear you ask.  Clearly the subject of preparation is multifaceted and could be the subject of a book on its own.  For the purpose of this blog I’ll just highlight some of the areas that I give consideration to when I think about preparation.  This list isn’t exhaustive and there will be some areas not covered on this occasion.

Choosing a race:  With the explosion in the number of ultra events now on the calendar this area often needs quite some attention.  There are pros and cons for all surfaces whether road, track or trail.  Race choice is heavily dependant on your dreams, aims and goals.  The main thing is to make sure that the chosen event will actually have a good chance of fulfilling those goals.

Research all you can about the event, the standard of organisation, read runner reviews from previous years and if the competition is important to you then see who else has entered.

Physical: You need to be confident and accepting of the training you have done and tapered in a way which is consistent with what you have done successfully before.  In my experience more runners arrive at the start line over-trained, or under-recovered, than the other way round.

Mental: Have a mental plan of some sort.  Have some idea of how you are going to organise your thoughts and control your feelings and emotions especially when it starts to hurt.  What goes on between your ears is the most important part of competing in an ultra and yet is, of course, unseen.

Target and goals: An absolutely key area that needs to be thoroughly prepared before you start.  Always have a series of goal times/distances to cover all eventualities with ‘to finish’ being the bottom line.  Once you start dropping out, for no obvious reason, it can take hold like a disease which can be very difficult to recover from.

Logistical: Give some serious thought to how you are going to actually get to the event and timing your arrival in order that you can perform your best.

I continue to be amazed at the number of runners who spend inordinate amounts of time, effort and money entering and preparing themselves for an event and then go and spoil it all at the eleventh hour with a daft travel plan arriving late at night just before the race begins.

Surely you can justify arriving a day earlier when you have invested so much in the event.  Similarly do give some thought to your finish plan and timing your departure such that you are in a fit state to travel home.

Accommodation: Always a controversial topic.  Pay less and put up with possibly inferior rest and food or pay more and hope for better of both. Once again I’ve seen runners spoil their chances by making poor decisions in this area and suffering as a result with anything from GI upsets or a miserable night or two.

In the UK I usually allow one or two nights at the race venue, depending on the race duration.  In Europe I like two nights and in the USA, three nights.

I always remember a comment made by the director of a management agency I had an interview with a few years ago.  He said “we’re trying to get additional support for you so you don’t have to stay in a Travelodge”.  Point taken.

Nutrition: One of the most common sights in ultras is people being sick!  It therefore goes without saying that a nutrition plan is of paramount importance.  My belief is that it’s best to have a skeleton plan which is then more flexible and enables you to respond to what your body tells you as the race unfolds.  More often than not less is required rather than more.  The temptation is to have a very detailed plan, hour by hour, but this never works in practice.

Pacing – run/walk: A pacing regime involving running and walking often works better when it is implemented from the start, rather than being a last gasp attempt to keep moving forward.  In order for this to happen you need to have given some thought to what your pacing plan is going to look like, otherwise your race could quickly descend into a ‘death march’.

Race Specific: The final three weeks before a race I like to call my time for Specific Race Preparation which as the term implies gives precise and individual attention to the requirements for the race coming up.  In particular this will include likely weather conditions, if heat training is required then do it. Also pay attention to the nature of course, so if the race is to be run on laps, then rehearse on a lap course.  If it’s to be a hilly trail, do final runs on something similar and so on.  Final training at least should be specific to the upcoming race.

Recommended reading: I was heavily influenced by the chapters on how the England rugby team prepared for the 2003 World Cup win in Australia, in Clive Woodward’s book “Winning!” published by Hodder and Stoughton.

The level of detailed planning went right down to travelling to Australia a year before the event, on exactly the right days, in order to gauge traffic levels and timing the road journey to the stadiums in order to allow adequate warm ups and so forth.  Amazing.

Similarly, the hugely successful triathlete Chris McCormack’s book “I’m here to win” published by Center Street in 2011, has some excellent advice on all areas of preparation and competing.

Both books are very well worth reading.

Conclusion:  The whole point is that once the gun goes you need to be content that you have done everything possible to give yourself the best possible chance of a successful outcome.  Control the controllable.  Clearly, sometimes fate intervenes and the unforeseen happens.  Well, so be it – that’s life!

Good luck and make your own luck with some great preparation.
I’m grateful to my sponsors: Orkney Micro Renewables, Loganair and the Orkney Islands Council.